Why glitter eyebrows are trending for fall! So, what a better way to complete the collection than by topping models’ faces with glittery eyebrows? Makeup artist Pat McGrath, who has a penchant for creating extreme beauty looks for Valentino in particular (remember spring’s colorful feather lashes?, added graphic swipes of vibrantly colored glitter below each model’s brow, which were heavily lightened for dramatic effect. She also rimmed the top and bottoms of the lash lines with black liner (and a gentle flick at the corner). The rest of the face was left bare and natural, with a hint of dewiness above the Cupid’s bow and on cheekbones and noses. The lips also had a natural look.

The best part? All of the glitter eyebrows matched the models’ outfits, a trend we saw earlier this week at Schiaparelli’s fall 2019 couture show. One model wearing a head-to-toe kelly green gown sported glittery brows of the same hue, while another model who donned a teal blue mini dress also had matching sparkly brows, in the exact same color. 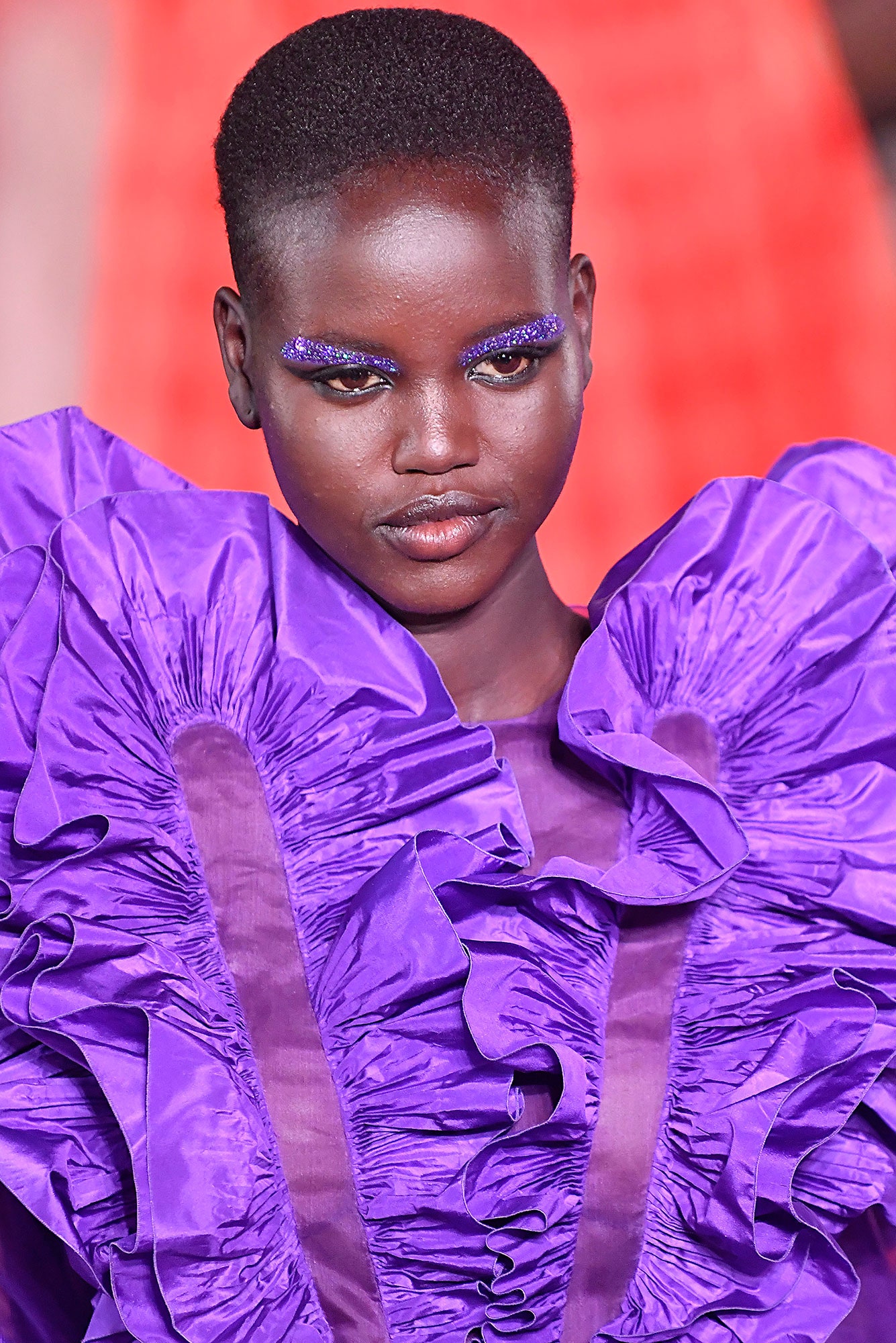 Along with that, hairstylist and Redken global creative director Guido Palau created elegantly low chignons with mini braids throughout, as well as wrapped around the base. “The inspiration of the show was folklore,” Palau told Allure. The simple style grounded the extreme makeup look.

“The look for the hair was pure Valentino with a nod to the sixties.”

“Make a clean center part and add two tiny braids on either side of the head using a little Redken Dry Shampoo Paste 05 to smooth. Then, gather the hair into a ponytail at the base of the neck, covering the ponytail with an invisible net and make a fold of the hair underneath. Bring the ends of the ponytail around the base of the fold and wrap cleanly. Then, with two side braids, wrap cleanly around the base finishing as you go with Forceful 23 Super Strength Hairspray,” he explains. “If the hair is not long enough, make up some tiny braids with extensions to wrap the base.”

It’s clear: Glittery makeup isn’t going anywhere. However, wearing it in a graphic shape right under your eyebrow might just be the best way we’ve seen to update the trend. To get a more subtle look, you could also try wearing a neutral or glitter-free shadow directly below the brow. McGrath’s creation just proves you don’t always have to stick to wearing your shadow and liner (or glitter) in the most conventional spaces — think outside the lid. How to do the perfect red lip (With Rosie HW)! Could this obscure new treatment give you your best ever brows? 3 Things your dermatologist wants you to know if you wear waterproof mascara!